Can we talk about nail polish for a couple of  minutes? I’m apparently a wrecking ball when it comes to keeping my nails looking nice. This might have something do with how I sorta bite my nails (MAYBE). I pretty much destroy a new manicure about an hour after it’s finished, just by doing basic things around the house…I’m lucky if normal nail polish isn’t half gone by the next day. I’ve pretty much given up on using nail polish on anything except for pedicures, which last forever (now you know I don’t gnaw on my own toes, I guess).

That said, a few months ago, I got a full-sized Julep nail polish, along with their Freedom Polymer Top Coat in a box of goodies. I figured I’d try it out before I gave them away to either my mom or Vivian. HOLY CRAP, GUYS. It’s awesome. Not only have I been super pleased with how the colors look against my skintone (which is a honey-ish color, which makes some colors look sickly), the polish lasts amazingly long.

Here’s my last manicure (using “Adrianna” and the top coat) after FIVE DAYS.

Keeping it real, this is my right hand (and I’m right-handed). That huge chip on the index finger happened yesterday, after strumming that finger through a few guitar strings because my pick decided to fly out of my hand at that moment. The rest is normal wear. 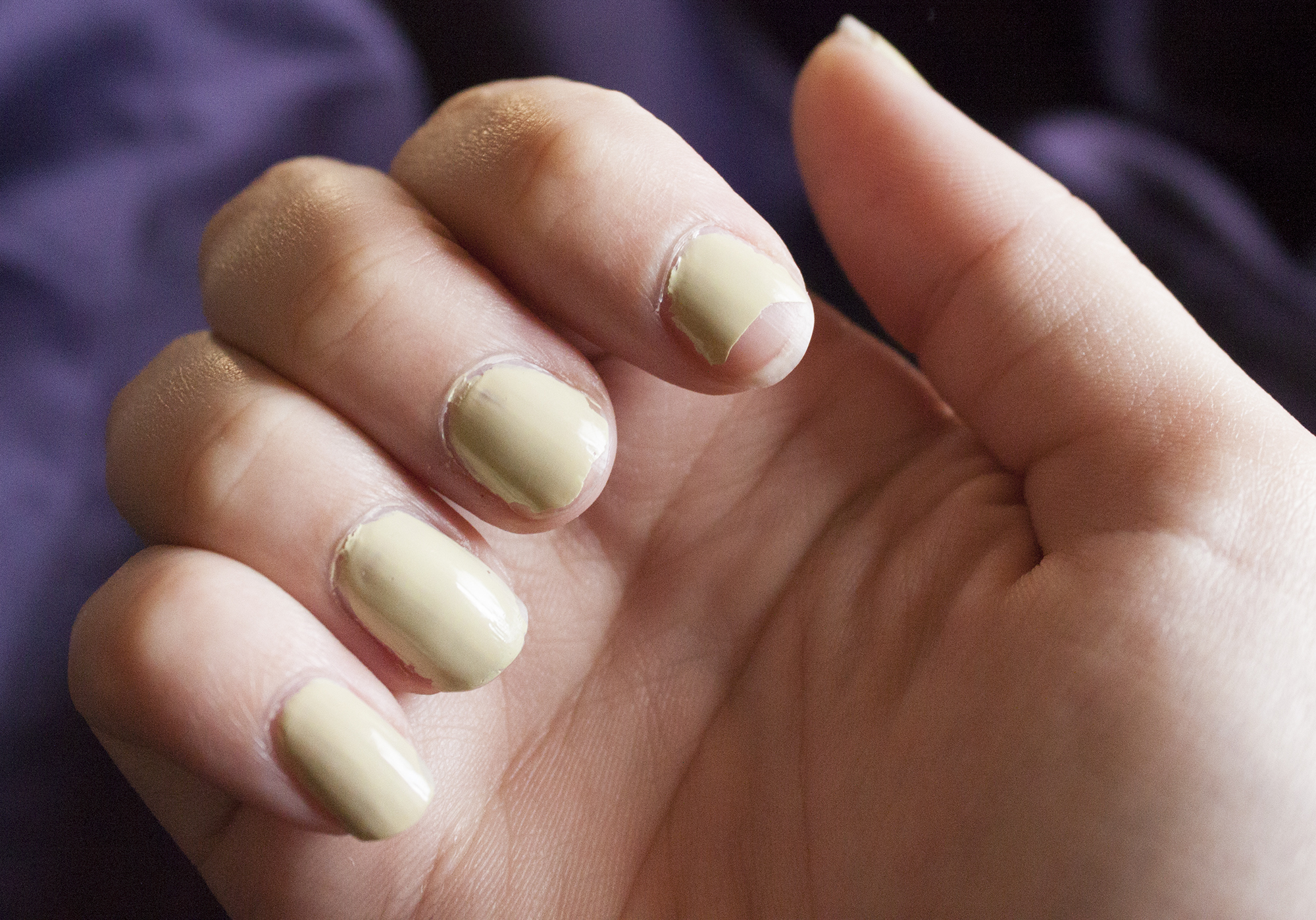 I’ve been very happy with the monthly color selections so far. Maybe it’s just been because it’s winter, but there’s always a dark color option, which I like. I have also gotten to try out a few things I wouldn’t have normally picked out for myself, a few of which I’ve really liked. I’ve also ordered maybe two or three different colors in addition to the monthly boxes…one was a rubbery looking black which is awesome, and the other containing the pistachio color above as well as a “suede” metallic grey that is like a matte metallic. I’ve been really happy at how un-obnoxious the special finish polishes are, though they definitely don’t last as long without the top coat (which is super shiny) over them. 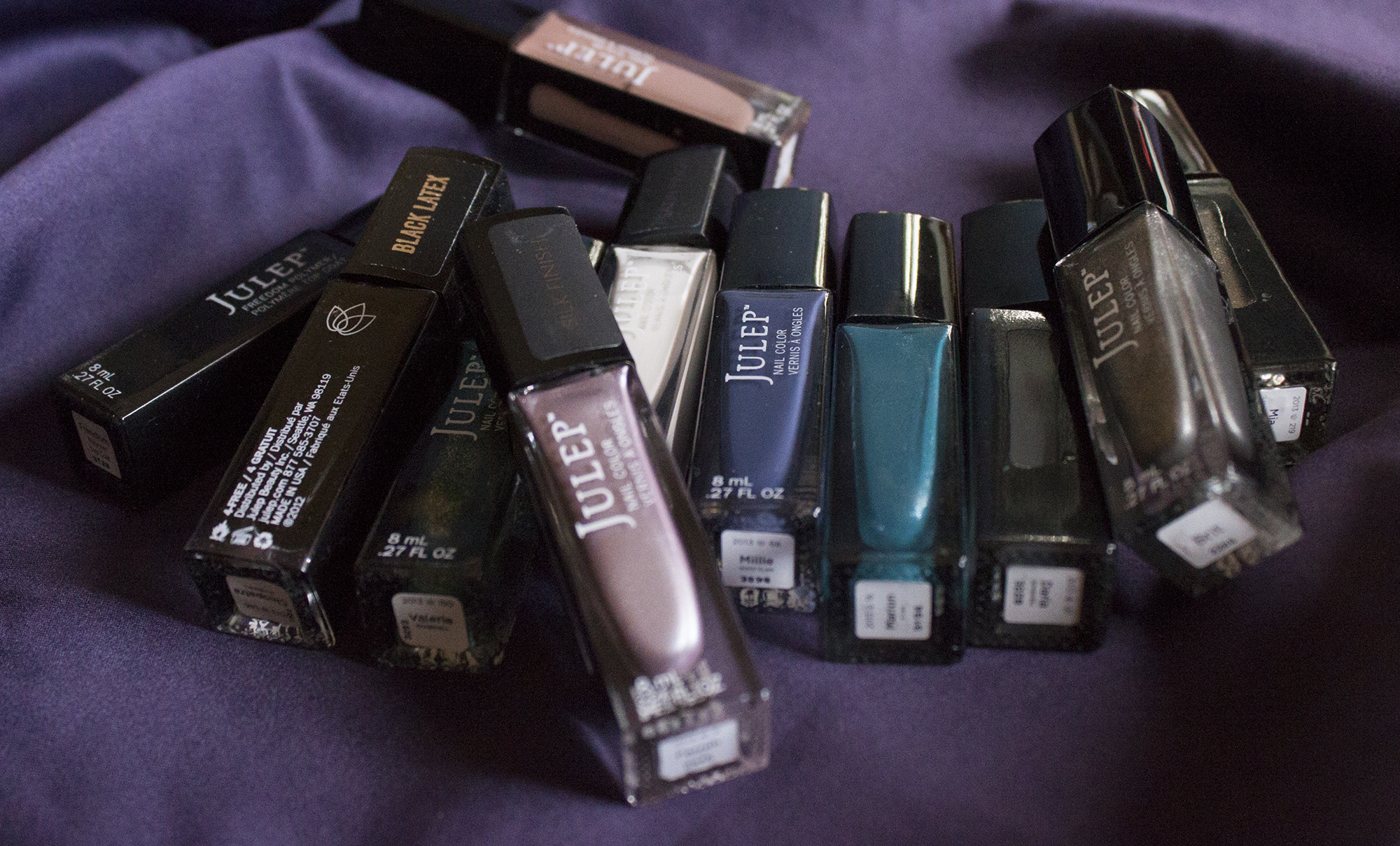 With the membership, every month it costs $20 for one of four choices in color combinations, which either comes as two polishes and some sort of additional cosmetic product or a nail tool, or as a set of three polishes. They also come with some sort of free treat…I got candy corn in one and some nail-buffing foamy things in another. Shipping is free, and every three months you get a free polish, and then discounts on the other products on top of that…otherwise, the full-price cost of the polishes are $14 (yikes!) In browsing around online, it seems like some people decide to go for the full collection (which I think is nine different colors), but I have no idea how much that would cost. I’m not sure how long I’m going to keep my subscription for…at a certain point in time, I’m not going to keep needing new colors, right? I’m planning on getting another couple months for myself, but the monthly box can also be sent to a friend (hello, birthdays) or skipped entirely without any problems.

I’ve talked to a few people about this after they complimented my nails and they’ve been super excited to try it out…but then I don’t get to give them my referral code in person. I get free stuff when people sign up! I also found a coupon for getting my first month free…I pretty much Google discount codes before I buy anything online.